"If you spend your whole life waiting for the storm, you'll never enjoy the sunshine." Morris West

E. Marquez will lead "Hiland Mountain Ridgeline" with an estimated duration of 3 hours.

Meet at 6:30 p.m. at the South Fork Eagle River trailhead.   We will head up Hunter Pass, then follow the ridge to Rendezvous Peak, Gordon Lyon, and Hiland Mountain.  We will return by the same route.

"Well, I'm near the end and I just ain't got the time And I'm wasted and I can't find my way home." Blind Faith.

Jesse Gobeli will lead "Unnamed" with an estimated duration of 4 hours.

Meet at 6:30 p.m. at the Rainbow trailhead.   We will ascend the unnamed trail through birch and hemlock forests and alder thickets to a high spot on the ridge.    The return route will be selected by participants.

"Glory is fleeting, but obscurity is forever." Napolean Bonaparte

Anne Ver Hoef will lead "Ballfield Gully" with an estimated duration of 2.5 hours.

Meet at 6:30 at the Glen Alps parking lot.  We will head up to the Ballfield and then make a left turn down the gully.  Hopefully, it will still have hard-packed snow; if not we will stay up a little higher on the rocks and tundra.  We will loop back on the Middle Fork trail.  Be prepared for wet feet.  May help to take microspikes and snowshoes, but postholing is way more fun.

"When I’m in nature, everything falls into place. I’m just one tiny piece of a big jigsaw puzzle and I like that.” ~ Bjork

Lee Helzer will lead "Snow Thrills" with an estimated duration of 3.5 hours.

Meet at Windy Corner for a 6:30 departure.  We will take the Turnagain trail for a short bit then bushwhack or posthole our way up Goat Head Couloir.  We will either return via the west ridge or the way we came.

Rob, Jesse, Jack, and I set out in rainy cool conditions.  We worked our way up through terraces of moose campgrounds.  Rob departed after 45 minutes.  Shortly after we stumbled across a very well executed secret trail.  Branches were trimmed and it was flagged with orange markings.  Someone had clearly spent a lot of time making this a great trail though some difficult terrain.  We followed it a bit then diverged to the snow gully.  We followed the snow gully up to the constriction where the snow had melted holes exposing a 20 foot waterfall.  It was not safe to continue so we turned around and worked our way over to where we were hoping secret trail would go.  We met the trail at around 2000ft and followed it all the way back to the Turnagain Trail.  At an elevation of around 750ft. there was a small memorial to “Lilly”.  We guess it was for a dog.

To whoever put in the trail, thanks!  We expect this trail will be a new ultra classic loop of the already classic Sheep Thrills route. 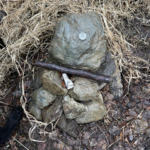 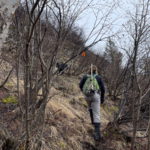 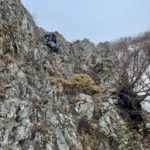 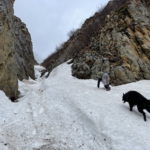 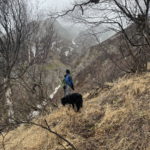 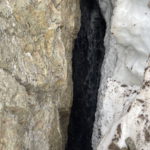 “A life spent making mistakes is not only more honorable, but more useful than a life spent doing nothing.” — George Bernhard Shaw

Lee Helzer will lead "Rays on Rainbow" with an estimated duration of 3.5 hours.

Meet at 6:30 in the Telephone Pole Rock parking area (on the left after Beluga Point) on the Seward Highway. We will head up to the Turnagain Arm Trail and then diverge onto a ridge heading towards the Black Mesa. From there we will asses snow conditions and either continue up the North Face or the south west ridge of Rainbow Peak (hopefully) enjoying a beautiful sunset along the way.  Ice axe and micro spikes recommended.

From the summit we will take the standard route back to the Turnagain Arm Trail and return to the cars. There are out and back opportunities for those not desiring partaking in the full enchilada. 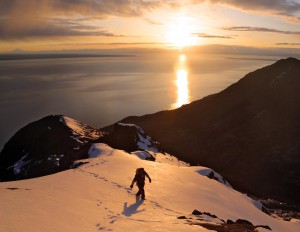 "Enthusiasm is the mother of effort, and without it nothing great was ever achieved." Ralph Waldo Emerson

E. Marquez will lead "Potter Overlook " with an estimated duration of 3.5 hours.

Meet at 6:30 p.m. at the Weigh Station on the Seward Highway just south of Potter Marsh.  We will diverge from the Turnagain Arm trail after a mile or so and head straight up to Potter Overlook.   We will return via a different route.  Route may involve substantial post-holing.

"... surely the Weak shall perish, and only the Fit survive." ~Robert Service (excerpt from 'The Law of the Yukon')

Rob DeVelice will lead "2 Below" with an estimated duration of 2 hours.

Meet at 6:30 pm at the parking area nearest to MP111 of the Seward Highway for a chill off trail out-and-back upslope (out) and downslope (back). 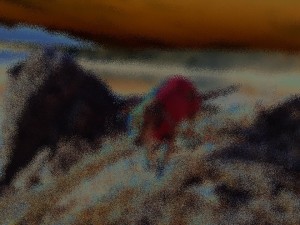 “I am going to outlive myself. Eat, sleep, sleep, eat. Exist slowly, softly, like these trees, like a puddle of water, like the red bench in the streetcar.” ― Jean-Paul Sartre

Jesse Gobeli will lead "The Wedge" with an estimated duration of 3.5 hours.

Meet at 6:30 p.m. at the Glen Alps trailhead.  We will complete a fast paced out and back summit of the Wedge.

"Only spread a fern-frond over a man's head and worldly cares are cast out, and freedom and beauty and peace come in." ~John Muir

Rob DeVelice will lead "Ferns in the Snow" with an estimated duration of 2 hours.

Rendezvous at 6:30 pm in the Telephone Pole Rock parking area. We will proceed upslope to visit a population of licorice fern (Polypodium glycyrrhiza) at the northern limit of the species. For cool information on licorice fern go to: 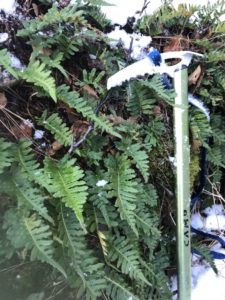 "Above all, do not lose your desire to walk. Everyday, I walk myself into a state of well-being & walk away from every illness. I have walked myself into my best thoughts, and I know of no thought so burdensome that one cannot walk away from it." - Søren Kierkegaard

Lee Helzer will lead "Indian Valley Exploration" with an estimated duration of 3 hours.

Rob DeVelice will lead "Phasers on Stun" with an estimated duration of 2 hours.

Meet at 6:30 pm in the parking area by the water treatment plant just after the Point Woronzof turn off.  We will do a sauntering loop through the woods.

"The past actually happened but history is only what someone wrote down." A. Whitney Brown

E. Marquez will lead "Sweat Lodge " with an estimated duration of 2.5 hours.