What the caterpillar calls the end of the world, the Master calls a butterfly. ~Richard Bach

E. Marquez will lead "Pottering Around" with an estimated duration of 3 hours.

Including Colden the Dog, six converged at Potter weigh station to explore the lands between Tutl’uh (Turnagain Arm) and Hkaditali Betnu (Potter Creek).

After an initial brief bushwhack the first two miles were on the Turnagain Arm Trail. From a rocky overlook we left the trail and headed straight upslope through miscellaneous brush and yellow leaved cottonwoods and aspen. As we approached the ridge the vegetation shifted to a combination of grass dominated areas and alder thickets. The ridge features a trail making negotiating the alder easy.

Our goal was to ascend to the first prominent tundra clad summit, followed by dropping to a saddle, and looping back down to the Turnagain Arm Trail. However,  our plans shifted near the alder-tundra boundary when Colden encountered a porcupine. The poor dogs muzzle, chest, and front legs and paws were loaded with quills.

Lee and the team pulled as many as could be easily extracted. The closest road accessible by trail  (rather than bushwhacking) was a spur of Potter Valley Road about 1.5 miles away.Lee phoned Heather to arrange a rendezvous and we headed quickly down the ridge trail by light of headlamps and hand helds. Colden moved down the trail with an obvious limp but never complained with even a wimpier. Amazingly, as we approached the road from above we could see the headlights of Heathers car approaching car to meet us.

Heather and Lee spent the rest of the evening pulling quills and taking Colden to the pet emergency room to extract as many of the remainder as they could. Colden had to spend the night at the vets and is now recovering at home. No Epics for Colden over the next couple weeks! 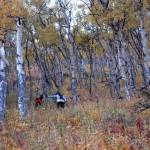 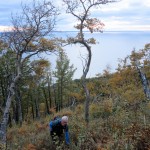 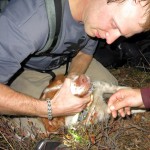 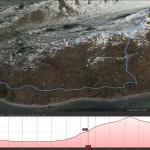