It was one of those March days when the sun shines hot and the wind blows cold: when it is summer in the light, and winter in the shade. Charles Dickens

Jesse Gobeli will lead "NS ridgeline" with an estimated duration of 3 hours.

Meet at 6:30 p.m. at the main trailhead at the end of Boretide road in Indian.   We will take the Powerline Pass trail for approximately 2 miles whereupon we will bushwhack uphill and due west as we explore the toe of the ridge that eventually becomes North Suicide Peak. 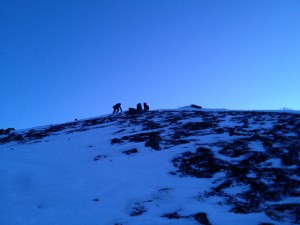 Two participants and one dog made the trek from Indian.   Deep snow and steeply forested hemlock slopes ultimately led to the ridgeline destination and skyline dominated by the two Suicides, Homicide, and Indianhouse Mountain.  Total time was 3 hours 30 minutes.