"Speak when you are angry and you'll make the best speech you'll ever regret." ~source obscure

E. Marquez will lead "North Suicide" with an estimated duration of 4 hours.

Meet at 6:30 pm at the Falls Creek Trailhead on the Seward Highway. We will ascend by trail and cross country to the ridge above Windy Gap. We will not ascend South Suicide Peak but will instead descend to Windy Gap via a sheep trail. Following an ascent of North Suicide Peak we will reverse the route. 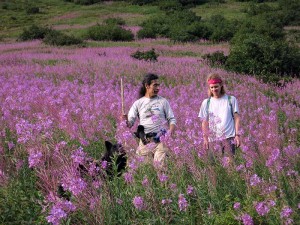 Jessie and Eliseo frolicking through a field of fireweed.