Rob DeVelice will lead "Sky Pilot" with an estimated duration of 2.5 hours.

Meet at 6:30 pm in the turn out on the left just past milepost 109 on the Seward Highway (past the fresh water pipe). After a brief section on the highway we will ascend steep slopes above the Sky Pilot rock climbing area. This loop route will mostly be off trail on steep, brushy slopes interspersed with steep, snow covered talus. Traction devises are recommended. 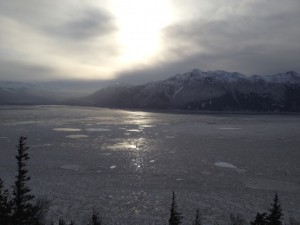